The Art of Kintsugi (金継ぎ) 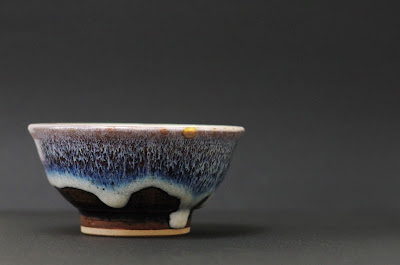 A kintsugi master can turn a simple cup into a work of art.

What Does Kintsugi Mean?

“Kintsugi” 金継ぎ (きんつぎ) is translated as “golden joinery,” and a related term, “kintsukuroi” 金繕い (きんつくろい) as “gold repair.” It is a traditional method of repairing pottery, dating back to the Muromachi Period 室町時代 (1336-1573).

Please note that this article contains affiliate links, which means that your purchasing a product via that link may provide us with a commission. We make it our goal to direct you to products that you will love and that will enhance your wa experience. 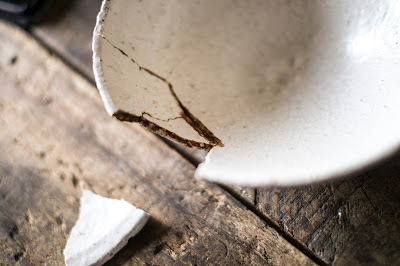 How Is Kintsugi Done?

With kintsugi, all the broken pieces of a vessel are collected, the rough surfaces filed down and put together with natural adhesive. The seams where the pieces are joined together are filled with lacquer, smoothed, sprinkled with gold, and burnished, so that the cracks glimmer like golden veins. It is thought that the new, mended pottery is even more valuable and beautiful than before it was broken. That’s why many people see kintsugi as a metaphor for life in which personal flaws, past pain, and weakness are seen as a valuable part of what makes the individual, and can even work out to be the person’s strength.

Kintsugi pottery is beautiful to look at, and the process of repair is fascinating to watch. The Kintsugi Library channel on YouTube has high-quality kintsugi tutorial videos with soothing background music and subtitles instead of narration–perfect for watching after you’ve had a stressful day at work and need to piece your mind back together!

How To Repair a Broken Vessel: a short 6-minute introduction video (English)

What Materials Are Used For Kintsugi? 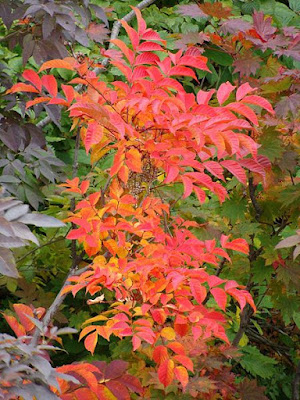 Authentic kintsugi makes use of a natural adhesive called “urushi” 漆 (うるし), a type of lacquer that comes from the Japanese sumac. Real Japanese urushi is expensive because from one tree only about 200 grams of sap can be harvested, and afterwards the tree–which takes about 10 years to grow–must be cut down. Urushi contains urushiol, an irritating substance that causes reactions similar to poison ivy. Interestingly, it is said kintsugi artisans build up immunity to it over time.

(Caution: For the beginner, it is advisable to wear disposable gloves and long sleeves when working with urushi. If any drips onto your skin, remove it with oil and then wash the affected area with soap and water. See a doctor if symptoms persist.)

In this day and age, a quick Google search will bring up plenty of easy DIY repair methods for anything, (even DIY kintsugi), but authentic kintsugi is a meticulous process. It takes one to three months to paint all the layers of urushi, with time for drying and curing in between.

When something dries, its water content evaporates. On the other hand, when something cures it undergoes a chemical change resulting in a solid (think of oil paint).

A Very Brief History of Kintsugi 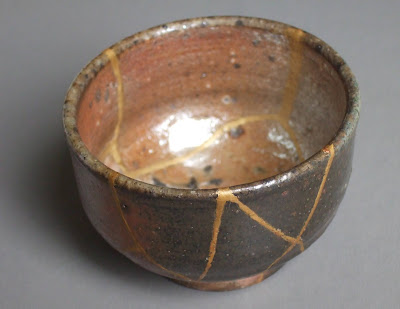 Using lacquer to mend broken pottery is not a new method. In fact, many artifacts from 1,000 B.C., the Jomon Period 縄文時代 (じょうもんじだい), still exist. However, as mentioned earlier, artistic repair took off during the Muromachi Period, also known as the Ashikaga Period 足利時代 (あしかがじだい). During this time, many traditional arts such as the tea ceremony, flower arranging, and noh drama developed in connection with Zen Buddhism. At the same time, Christianity came to Japan for the first time through the Jesuit missionaries.

During the Muromachi/Ashikaga Period, Ashikaga was the shogun, or military leader, and Muromachi was the area where his headquarters were based.

The Tale of Yoshimasa’s Favorite Cup 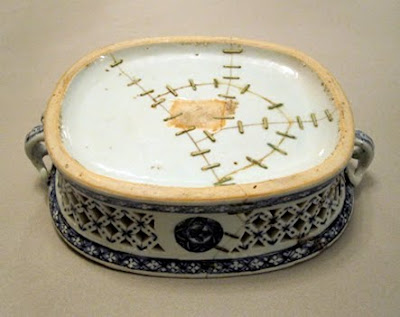 The tale goes that when Shogun Yoshimasa Ashikaga broke his favorite tea bowl, he was devastated and sent it back to China, hoping to get it replaced or repaired. They returned his precious bowl to him repaired in the traditional Chinese style, using metal rivets. Ashikaga was not satisfied with the aesthetic look, so the Japanese craftsmen tried their hands, using kintsugi to repair it instead. From that time on, it is said people accidentally-on-purpose smashed a lot of pottery.

The Tale of The Tea Master, The Hot-Tempered Friend, and the Broken Vase 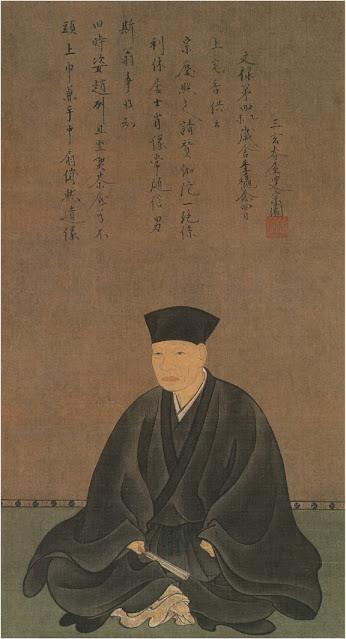 Sen No Rikyu, the Tea Master

You may already know about Sen No Rikyu 千利休, who was behind many of the conventions of the traditional Japanese tea ceremony (see our post about Chado: The Japanese Tea Ceremony). What you may not know is the story of him, his hot-tempered friend, and the broken vase.

It is said that Sen No Rikyu and some others went to be house guests. Knowing what a refined person Sen No Rikyu was, the host put a beautiful vase on display, hoping to get a few compliments. To his dismay, Sen No Rikyu paid no attention whatsoever to the vase and instead went on and on about a tree branch he spotted out the window. The hot-tempered host was so upset that he smashed the offending vase immediately after Sen No Rikyu left. His other guests, good friends that they were, gathered the pieces and had the vase repaired by kintsugi. Eventually, the friend cooled down and invited Sen No Rikyu over again, with the repaired vase on display. This time, Sen No Rikyu noticed it, declaring, “Now the vase is magnificent!”*

p.s. *There are many English-language references to this story about Sen No Rikyu, but we haven’t found any in Japanese so far. If you know of a good source, please let us know in the comments!

How To Do Kintsugi 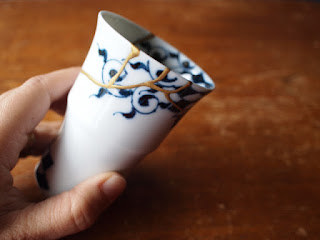 Now that you know what kintsugi is, its history, and how its done, here are some useful resources:

Nom Living Kintsugi: A how to guide: For the curious–a faux-kintsugi tutorial, using epoxy adhesive

Kintsugi Nail Art: For the ladies–one way to incorporate kintsugi aesthetics into your style!

Kintsugi Pieces in Harmony: For all–in this video Nio Nakamura, kintsugi artisan, shares kintsugi repairs of dishes from all over the world.

How About You? What about kintsugi fascinates you the most? Have you seen its influence in art outside of Japan? Let us known in the comments. Also, be on the lookout for part two of our kintsugi series: The Heart of Kintsugi 金継ぎの心 (きんつぎのこころ)!

Products to help you incorporate the kintsugi aesthetic into your life–


The School of Life: Kintsugi