Right around the same time that we in the West start Christmas shopping for friends, family, and co-workers, Japan is also getting into Santa-mode. Only, it’s not for Christmas. You may already know that in Japan there are two annual gift-giving seasons called “Ochugen” 御中元 (おちゅうげん) and “Oseibo” 御歳暮 (おせいぼ). Maybe your parents or grandparents sent Oseibo gifts to your distant relatives. But do you know where the tradition comes from, what you’re supposed to give to who, and what is “noshigami” (Hint: It’s not another type of kamisama!)? Read on to find out what we learned about Japan’s winter gift-giving tradition, and how you can add a little wafuu to your gifting this season and onwards! 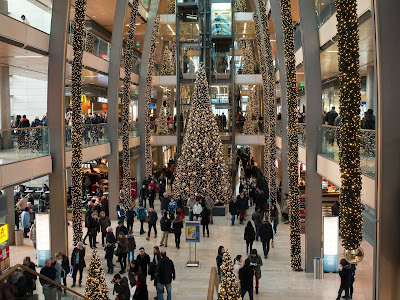 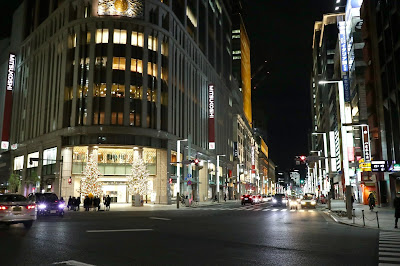 As we said, Oseibo–Seibo, without the honorific “o” 御 (お)–means either the end of the year, end of the year season, or the gifts given during that period. Oseibo gifts are traditionally given to people who have been kind to you during the year, or to whom you feel indebted. In the olden days, this included: relatives, matchmakers, called “nakoudo” 仲人 (なこうど), doctors, teachers, and superiors. These days it can include neighbors, landlords, and in the business world, business partners or clients.

Ochugen occurs in July, while Oseibo is in December and is considered the more important of the two occasion. The exact dates differ depending on the region. Refer to the list below:

It is also acceptable to give Oseibo gifts in November, before the gift-receiver gets busy with end of year get-togethers and festivities. The timing of your gift matters, because Oseibo gifts are often edible. Which leads us to our next point.

What To Give For Oseibo

Oseibo gifts are meant to be truly useful, which is why they fall into one of two camps: food and drinks or household goods. Common choices for food gifts are: hams, sausages, rice, salmon, herring roe, fruit, and crab. Alcohol is also a favorite. As for household goods, some people give hand towels or soap. Many people order gifts to be sent directly from the producer. This kind of gift is called “sanchokuhin” 産直品 (さんちょくひん), or “sanchichokushouhin” 産直商品 (さんちょくしょうひん). This is an especially good choice if you want to give a high-quality gift from a well-known producer, or if you want to give a regional gift.

How Much To Spend For Oseibo

What To Avoid Giving For Oseibo 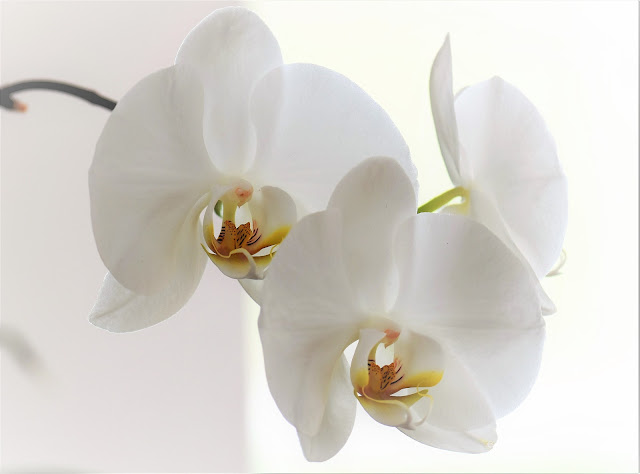 Some gifts are considered taboo. Know what not to give, so you don’t offend the person you are trying to thank!

● Something of the color red

● Knives, because they represent cutting

● Socks and entrance mats, because they represent treading

● An expensive gift to someone much older than you

● Writing utensils and clocks or watches, because they represent hard work (especially to your work superiors)

How To Wrap An Oseibo Gift 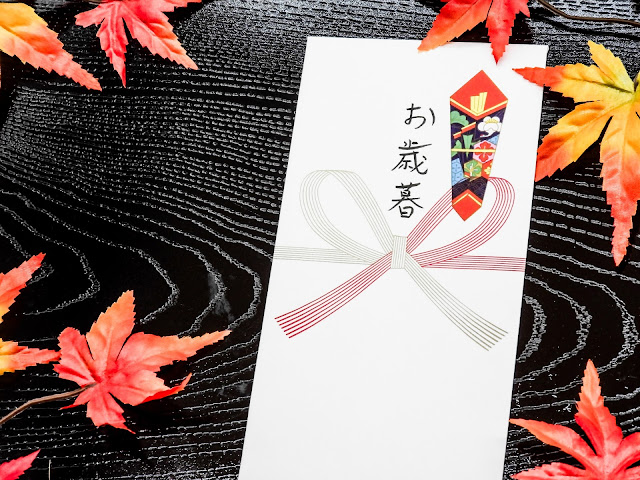 You will easily recognize Oseibo gifts, because they actually have the word “Oseibo” written on them. There are quite a lot of conditional rules when it comes to how to wrap Oseibo gifts, and it can be quite complicated, but in the standard case there are 3 necessary elements:

2. “Mizuhiki” 水引 (みずひき) a special knot of the celebratory colors red and white

In the olden days, noshi was made from dried strips of abalone and affixed to a gift, signifying the giving of a life as an offering. From there it evolved into today’s beautiful little decoration made of paper. Quite commonly, you also see “noshigami,” which is a white piece of wrapping paper with a printed image of noshi and mizuhiki, and a space for writing the hyou-gaki.

Did You Know? You can go green by using tanzaku noshigami, which is a narrow, strip-type noshigami. (Remember “tanzaku,” 短冊 (たんざく) the strips of paper you write your wishes on and hang on the bamboo tree in the summer? If not, check out our post, “Tanabata–The Festival of Stars!”)

The History of Oseibo 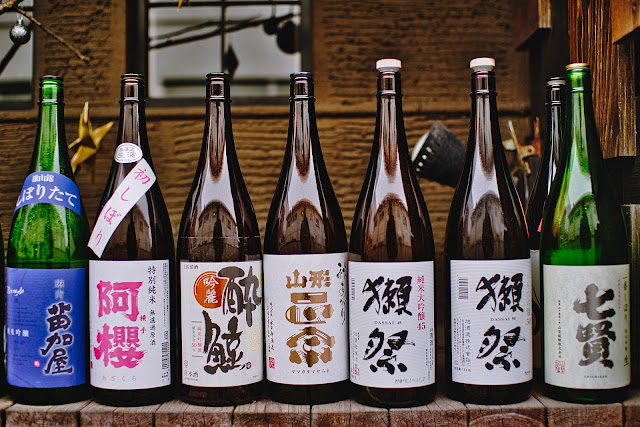 Oseibo originates from the traditional offerings placed on family members’ graves, usually food such as sake, herring roe, and rice cakes. In the 1600’s, this became an offering to the “toshigami,” 年神としがみpresented to the parents of the bride’s house. Toshigami was worshiped as the god of the rice harvest and god of the new year. The practice of presenting Toshigami’s gift turned into simply giving gifts to other people, and is still a strong tradition among older folks. Among the younger generation, Oseibo has largely faded away, although perhaps it has been replaced by Christmas gift exchanges between couples. 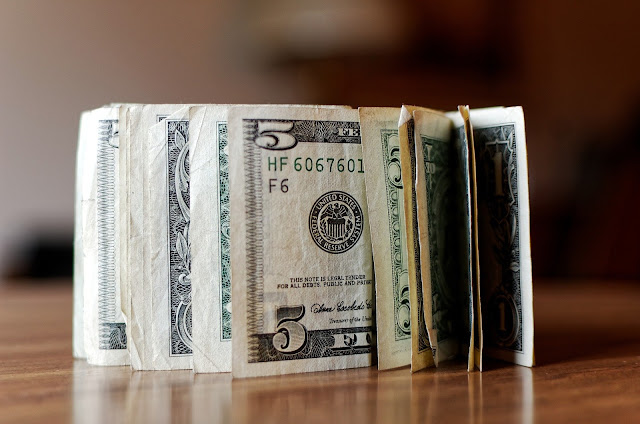 Western Style: The gift matters more than the wrapping. You’ll throw the wrapping away in the end!

Wafuu Style: The wrapping is equally important to the gift inside. It shows how much you care about the recipient.

Did You Know? If you give money to someone, either as a gift or to pay them back, you should always put it in an envelope. Handing them a wad of cash is as inappropriate as walking around in public without any clothes on, hence the term “hadaka no okane,” 裸のお金 (はだかのおかね) literally, “naked money.”

Did You Know? If you’ve ever shopped at a department store in Japan, you have probably been asked one of two questions by the store clerk:

Although it’s not necessarily eco-friendly, accepting the spare bag and giving your gift in pristine condition is a small way to show greater appreciation to the person you are gifting!

Western Style: The bigger, the better!

Although Japan is known for its extraordinary hospitality, or “omotenashi,” in which they go to incredible lengths and great expense to treat their guests, sometimes it really is more about the fact that you thought about the person.

Western Style: Give a gift, receive a thank you card.

Wafuu Style: Give a gift, receive a thank you gift.

Because it’s etiquette to give “okaeshi,” お返し (おかえし) a thank you gift in return for a gift, some people try to keep their own gifts low-key, so that the recipient doesn’t feel obliged to give back a lot. Sparing someone that trouble is a gift in itself!

A gift given after the season has passed, is considered very sloppy. Don’t worry, though! Everyone gets busy at the end of the year, and if you don’t make it in time for Oseibo, there are lots of other seasons that follow.

If you miss Oseibo, you can change your greeting to “Onenga,” 御年賀 (おねんが). Now, it’s a New Year’s gift! And if you miss New Year’s, no worries! You can turn Onenga into “Kanchu mimai” 寒中見舞い (かんちゅうみまい), a greeting sent during the coldest month of the new year. If you miss Kanchu mimai, still no worries! You can still send “Yokan mimai” 余寒見舞い (よかんみまい), sent roughly in the middle of February, during the last truly cold spell before spring comes. 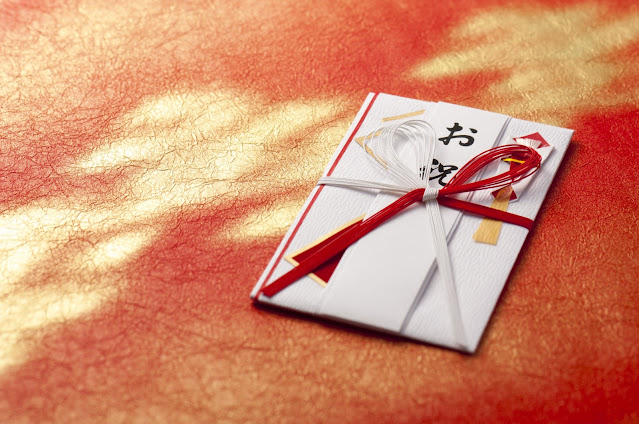 Next time you give someone a gift of appreciation, make it small, but make it count! You can even add a gift tag that says, “Honno kimochi,” ほんの気持ち (ほんのきもち) meaning “A tiny token of appreciation,” or “Sasayaka na mono,” ささやかな物 (ささやかなもの) “Just a little thing.” No matter how small it is, though, don’t forget to wrap it, and make sure it’s in a clean, crisp bag!

How about you? What aspects of your gift-giving style or Wafuu and which are West? Let us know in the comments!